As January quietly slipped into February the weather gods kept to their commitment to provide temperatures that where akin to those found in a freezer. Not daunted I continued to pedal; hermetically sealed in my club mega windblocker jacket along with plenty of merino wool and windblocker cycle longs. Just as I was approaching the weekly minimum 400km target the weather gods did the 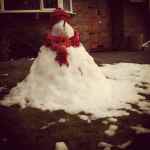 dastardly deed and spent a whole Sunday depositing loads of nasty cold white stuff on the ground. I was left looking out of the window admiring the fine whiteness of the outside world for the next 7 days. The only respite came when I was able to sneak 12km down to Sainsbugs and back on the Brompton in between top up snow fall.

Thankfully, the weather gods got fed up with their little game and allowed the weather to fine up and purposeful cycling to recommence. The improvement in the weather was so good that a near perfect day was provided for the Reading Kennett Valley Run 200km randonnee. The peloton contained many of the ‘usual suspects’, including YACF’s Lyrca Man and RideHard in search of their February Randonneur Round the Year award ride. The controls at Hungerford and Bratton were as usual excellent, both cafes happily coping with a mega influx of hungry cyclists. Mick Simmons and his team did a fantastic job at the arrivee providing a warm welcome and a great post ride feast.

The Bike Hub app is great, particularly for navigating around central London.

The best bit being that it knows all the cycle paths and cut-troughs that only a local rider would know. However, when it decides to have one of its bad bike Sat Nav days, things get not only interesting but very, very frustrating. Riding the Brompton to my new place of work with the Bike Hub navigating (as and when it felt like it) provided some unexpected but interesting urban adventures. The route is now safely logged in my brain’s navigation SIM card, so no more suffering from the vagaries of Mr Bike Hub. Although, having tried other bike Sat Nav Apps, this is the best one by far and keeps improving all the time.

The Bike Butler sourced and installed the most fantastic pair of pedals onto the Brompton. The Wellgo plug-in pedals allow you the luxury to choose either SPDs or flat pedals but when folding the Brompton, the pedals aren’t in the way as they simply pull out and then plug in when you are ready to ride again. Having thoroughly tested them in and around town, including on Gypsy Bugs Utilitaire challenge, they get big ‘thumbs up’.

In ’ things to look forward to’, the spoke elves finally visited Chez Brevet Bird as

February faded into March with the necessary spokes for the Alfine 11 speed hub and it’s rim. So once the bike butler has knitted the spokes with the hub and rim, the first spin on Scotti avec Alfine isn’t too far way. Also, I still need to check out if the ‘Remede du Randonneur’ works that I was recently given!