Half Wheeling – The 2013 Easter Arrow

The Fleche Velocio was created by Audax Club Parisien and forms part of their Randonneur 5000 award. Other countries introduced local versions to qualify for the same award, Audax Australia’s Opperman All Day Trial, RUSA’s Fleche-USA and AUK’s Easter Arrow. They are all inspired by the origins of ACP as an audax club, rather than the randonneur club that ACP later became. An audax brevet, in the strict sense, is where a group led by a captain rides together over a planned route to a predetermined schedule.

For the Easter Arrow, between 3 and 5 machines (a tandem is 1 machine) ride a pre-determined route within 24 hours and at least 3 machines must finish for the brevet to be validated. At least 360km must be ridden in the 24 hours with at least 25km covered in the last 2 hours. Aiming for more than 360km is fine and some teams endeavour to better the best distance for their country.  A team’s brevet distance can vary by 20% up or down on the day, provided at least 360km. The ride can start anywhere but finishes at a predetermined location or ‘concentration’. In the UK, the event finishes in York.

Dave (aka The Bike Butler) pulled together, via YACF, a team of little wheelers starting their Arrow from Hertfordshire. The team went by the name ‘Heroes on the Half-Wheel’ and included Adam (akin) on an Airnimal, Rimas (zigzag) on a single speed Dahon, Dave (LWaB) on a TSR and me (HK) on Casper the little White Moulton. We rolled out of Watford Junction at 10am on Good Friday which, given the challenges that lay ahead, should have really been Bad Friday. 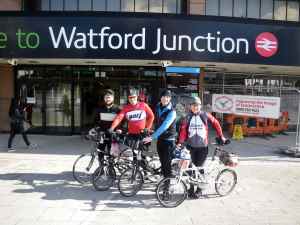 Everything started smoothly enough. The wind was kindly over the first 50km to Thame and the sun even shone from time to time.  Out of Thame and swinging right to the next checkpoint at Olney; the wind was in our faces. It would remain thus for virtually all of the ride, blowing at a persistent 13mph.

The first indication that Mr Google Maps, who had assisted in planning our route, wasn’t exactly trustworthy came when we were sent down a brief but Roubaix-like section of Sustrans Route 54. Confidence in Mr Google Maps was restored as his route though Milton Keynes ‘Red Routes’ was not only faultless but quiet and exceedingly pleasant, though a little time-consuming.

After a swift coffee and supermarket stop, the team rolled out of Olney. Then the challenges started.  Suddenly the Airnimal decided to have a bad rear wheel moment and break a spoke which it cunningly used to break the Campag chain. As none of us had a 10sp connector link, Adam thought his ride was over. Having a former professional mechanic on the team (the Bike Butler) ensured that the wheel was quickly trued and the chain mended; strictly against the manufacturer’s instructions. 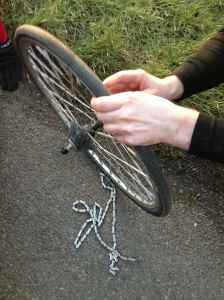 The team was back, half-wheeling their way to the next check point at Spalding via snow-edged lanes and a gourmet dinner stop at Peterborough. Dave decided that spending an hour or so holed up in the toilet would be a good way to rest up. We had thought about sending in a couple of search parties but instead waited for him to emerge, somewhat lighter.

Leaving Spalding and heading into the Fens, the toughest part of the ride began. To begin with, the only challenge was the bitter temperature, which would freeze everyone’s feed bottles until daylight returned. Then Mr Google Maps decided a bit of midnight frozen bridlepath orienteering was in order. The team took to their feet, pushing the bikes for what seemed like forever until the bridge to cross the dyke appeared; a good 3km later than promised. Thankfully, after the bridge was crossed, the team were able to easily get back on route. Frosted and icy lanes still had to be navigated before the next checkpoint, Gonerby Services.

The team finally made Gonerby at stupid o’clock in the morning with another team already ensconced. It turned out that Mr Ferry’s Reading team had become Arrow abandonneurs and would be proceeding to York by train. Getting the little wheels to York in time was now out of the question but some swift calculations were made on the back of a KitKat wrapper.

As time is miles, the little wheels tore themselves away from the warmth of the services to head out into the cold, cruel world for a fairly flat but freezing leg to Lincoln. If Lincoln was gained no later than 6am, completing the minimum official distance of 360km by the 24th hour was possible. The real distance on the road would be noticeably more, of course. Legs and little wheels whirred into action again.

The team headed out of Lincoln 24 hour Services just after 6am. The weather gods still had one more delight to share with us. Light snow, which thankfully was pesky but unable to settle.  The next milestone was to make the Scunthorpe checkpoint by 8am (the 22nd hour).  The team kept tired legs turning and, little wheels whizzing, arrived at Scunthorpe after the appointed hour. 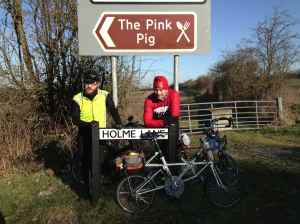 The Airnimal was clearly still unhappy with the world and broke another rear spoke just before Scunthorpe.  Dave swiftly trued the wheel again and the team commenced the last hour and a half of riding which would hopefully give enough time to arrive at Goole for ACP minimum official distance.

The team toiled in the lanes hugging the Trent River with the wind sometimes giving a helping hand from time to time (and about time too), by being on our backs rather than in our face.  We sprinted thorough Swinethorpe, which gave us just enough time to cross the Goole prime sign as the 24th hour struck and 363 official kilometres completed (about 390km in reality).

After a late breakfast in Goole, it was time to ride the last 40-odd km to York where trains awaited to take the team home. Happily only 1 broken spoke and a couple of snow flurries to cope with during those couple of extra hours.

Arriving in York at 1 o’clock, Rimas, Dave and myself had enough time to exchange some banter with the teams sill in the pub, quaffing ale and downing hard-earned food. It turned out that only about half the teams that had started out the previous day had made it to York. I can’t remember a harder Arrow, even the 2009 one where we had to abandon due to snow wasn’t this tough.