Between the wonderful expertise of Dan Farrell and his crew at Moulton building the frame and Dave Minter bolting on the components, Casper is now a complete and rideable machine.  Next step, road testing to put him through his paces and check that nothing vital was going to jump ship during PBP audax and rando.

As with all bikes, there are a few things mechanical that on the work stand are fine but, on the road, needed tweaking.  These were found and resolved on a pleasant 100km ride over to friends.

Then came the main tests.  Firstly a 200km DIY ride from Oxfordshire, over to the Cotswolds, then through the Chilterns to home.  Then to really check that nothing was going to work loose on the roads of France, a 100km ride using the Sustrans paths of Hertfordshire (route 64), much of it off road.

Casper performed brilliantly throughout the various roads, hills and paths of the first 400km.  He was quick along the flat, descended like a demon, cornered on tramlines and figured he might just be Pantani when going up hills! 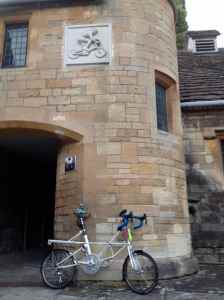 After only a few rides a-wheel, Casper is challenging the beloved Robbie (my Roberts S&S coupled bike) as my favourite stead out of the one or perhaps many I have to choose from.